A year into his post of director general of Saudi Arabian Airlines Corporation, His Excellency, Eng Ibrahim Al-Omar, speaks exclusively to Mark Pilling about how his group will play a strong role in helping to deliver the grand vision and transform the kingdom's fortunes.

If Saudi Arabia is to convert its hugely ambitious ‘vision 2030’ strategy from thousands of well-crafted words into jobs, wealth, a healthy society, and a leading global economy, a strong, home-grown air transport industry will be essential.

The kingdom ·s leaders only need lo look a few hundred miles east of capital Riyadh to role-models in Dubai, Abu Dhabi, and Qatar to see how powerfully airlines contribute to this mission.

A key target in this strategy, kicked off with the kingdom opening its borders lo the world in September 2019, is to welcome I 00 million international visitors by 2030. The pandemic, and subsequent closure of borders to overseas travel, has stalled this drive but, make no mistake, Saudi Arabia is determined to make up for lost time.

The man charged with leading the country’s llag-ca1Tier-Saudi Arabian Airlines -to transport millions of these travellers, is His Excellency Eng lbrnhim Al-Omar, who was appointed director general of the corporation on October 23 2020.

A year on from his appointment, Al-Omar spoke of his mission exclusively to Arabian Aerospace in early October, where he was attending his first International Air Transport Association (IATA) annual general meeting.

As an airline boss and a member of IATA’s elite governing board, he was rubbing shoulders at the Boston gathering with fellow CEOs, who were all wearing the bruises or spectacular revenue foils, weighty new debt burdens, a highly uncertain recovery path, and an agenda that has sustainability right at the top.

Aviation is a connector of industries, people, logistics and supply chains. Virtually everything we do, touch, exchange, purchase and interact with is, in some way, enabled by aviation.

Unsurprisingly, this seasoned business executive, who was most recently the governor or the Saudi Arabian General Investment Authority and, before that, chief executive of Bahri, the national shipping company of Saudi Arabia, is unfazed by the challenge.

“I am not sure that this was the best time to join the airline industry,” he joked. ” But, as you know, in every crisis there is opportunity. So, this is how we look at it and 1 think, after Covid-19, it is a good opportunity for airlines to rebuild their market share again.

“You know, aviation is a connector or industries, people, logistics and supply chains. Virtually everything we do, touch, exchange, purchase and interact with is, in some way, enabled by aviation.”

The airline he inherited a year ago has been on its own significant transformation journey over the past several years, and this large state-owned carrier has an inherent advantage not enjoyed by any or its Middle East rivals-a strong and growing domestic market-as well as operating in a country investing heavily in diversifying the economy away from a reliance on oil. 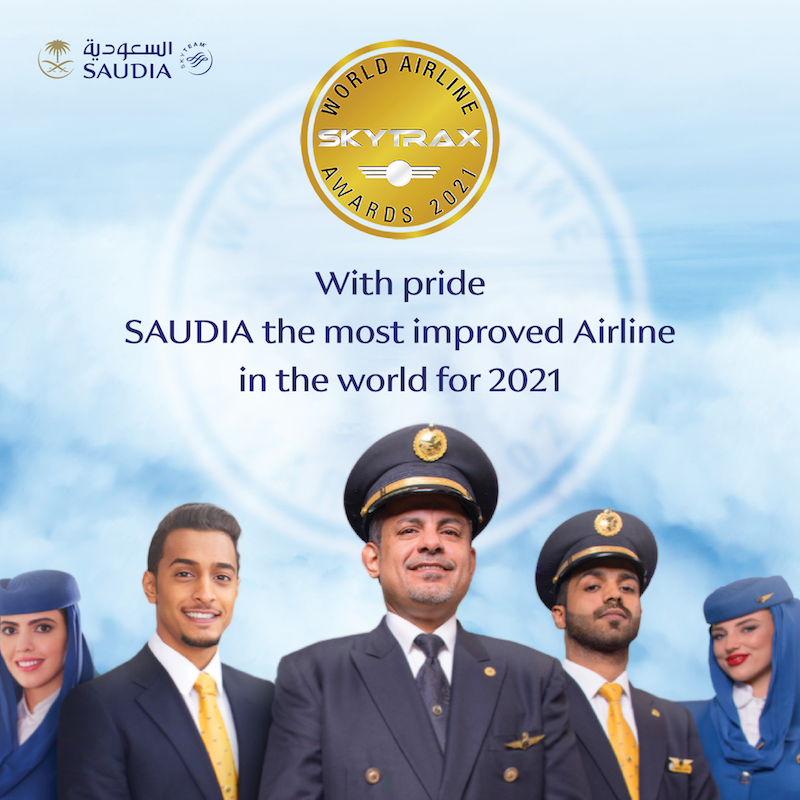 “I think that’s a golden opportunity for us, especially with the new infrastructure, the newairpoti, the new regulation I which requires firms wanting to do business in the country to have a regional base by 2024],” he said, pointing to the fact that many other airlines had been forced to cut back hard. “We have a very strong domestic market that gives us a competitive advantage compared to some of our rivals.”

Secondly, the MRO sector is seen as another big opportunity. “I think we are expecting a high demand for maintenance. We arc building the largest MRO village in the Middle East region. We have planned to localise a lot of services in Saudi,” said A l -Omar.

On the cards is a deal with some of the large original equipment manufacturers (OEMs) to be an authorised service provider. targeting business across the whole region, he added. Last, but certainly not least, is the kingdom’s 2030 plan. “The vision, actually, is also creating a huge opportunity for Saudi Arabian Airlines. As you know, there i s the I 00 million target for visitors in the tourism sector and they’re talking about 30 mi Ilion Umrah visitors,” said Al-Omar.

That seems set to change, according to Al-Omar. “Saudi’s roadmap spans four continents covering more than 95 destinations. We do have a target to even increase our destinations to meet the tourism plan and the Haj and Umrah [pilgrimage] plans. We have a long-standing presence in global markets around the world.

“What’s different now, however, is that previously the majority of the business waspoint-to-point traffic. Now we will go after even the transit traffic, which means more destinations, more frequencies that we will add to our network.

“Also, the business environment has changed significantly in Saudi Arabia. We have diverse enterprises emerging. with global investment moving into Saudi Arabia having a very strong presence.”

The return of international traffic will take time, with Al-Omar expecting 88% recovery to pre-Covid levels in 2022 and full recovery by 2024. But the home market has bolstered Saudi Arabian during the pandemic. “We have very strong domestic traffic in Saudi Arabia, and this has accelerated the need lo be present in more markets, and also to optimise the network, increase frequencies and deploy aircraft charters, because theplan is to charter aircraft for the Haj and Um rah segments as it’s seasonal traffic,” he explained.

The Saudi Arabian group’s home success has been boosted by Jeddah-based Flyadeal, which began operating domestically in 2017, and is starting to take new Airbus A320neos to add to its fleet of 15 A320ceos.

“Flyadeal is a game-changing initiative that has become the first successful Saudi low-cost airline,” said Al-Omar. “It is also currently the fastest growing airline in the Middle East. And the airline accomplished a unique feat by launching exclusively on digital and social channels -99% of our business is digital.

“In July, Flyadeal began international operations between Riyadh and Dubai, and has carried more than 11 million passengers overall in less than four years or operations.” More international services will be announced this year. “With Flyadeal, you will see a big expansion coming. We will triple our fleet in the coming three years,” said Al-Omar. Although the Saudi Arabian Airline Group docs not reveal detailed financial results, Flyadeal is profitable at the operational and net level, he said. However; the kingdom’s ambitions do not necessarily stop at Flyadeal, or the existing flag-carrier, when it comes to airline development to support vision 2030.

In July, Crown Prince Mohammed bin Salman Al-Saud announced the planned creation or a new national carrier. Al-Omar couldn’t comment very much about the fledgling plan, with his focus being on Saudi Arabian. However, as he noted: ”The market is big with the numbers we are talking about the 100 million tourists. It’s really big numbers and also a very ambitious target.

“I think this will complement actually and not compete because, ultimately, the owner will be one. And I think it’s good for everyone and Saudi Arabia will not do it if it doesn’t make sense, both for Saudi Arabian Airlines and for the new airline.

So, let’s see what’s going to happen; there is still not much information about this new airline.”

While watchers will observe this development carefully, Al-Omar is focused on ensuring that Saudi Arabian keeps its house in order. He will not discuss how much, or whether, the carrier has received state money during the pandemic, but stressed how domestic business has thrived, helping to keep the cash coming in.

“l think Saudi domestic traffic helped us big time; it’s a tough time for all airline companies. We managed, through many initiatives, to go through this crisis. We learneda lot and we’ll keep learning.”

In recent years, the carrier has been updating its fleet, and it now operates some 144 Airbus and Boeing aircraft. ”ft has been an area of focus, and it’s part of our transformation,” said Al Omar. “We will have 38 aircraft [planned for delivery] fromtoday till 2026. Just last March we raised about SAR 11.2 billion ($3 billion) with six local banks. This was for the partial financing of 73 aircraft, which will cover us up to 2024.

“The financing was the largest of its kind and it will be sourced entirely from within Saudi Arabia, supporting the national flag-carrier and its aviation recovery. To be able to raise that amount of money also shows the trust from the banks for Saudi Airlines during this Covid-19 pandemic. Actually, it was oversubscribed, and that shows the confidence of the banks for the airline.”

Investing in a young fleet, and the fuel efficiency gains that brings, is a core component of the carbon emissions reduction story at Saudi Arabian.

IATA’s Boston meeting had a huge focus on sustainability, and Al-Omar said that Saudi Arabian takes its responsibility very seriously and supports IATA’s initiative to reach net zero emissions by 2050. He added: “We recently appointed a VP-a new position within Saudi Arabian-for environment and sustainability. And we do have already about 50 sustainability initiatives targeted for 2022.

“I think, by the way, nobody knows how we will achieve that target,” he said of net zero by 2050. “But it’s a target where we are all aligned. It’s not just the airline. This is the manufacture, the airline, the government, everybody needs to contribute to that target. And everyone needs to invest from I heir side, because airline companies cannot take the load on their shoulders 100%.

”Does he see the OEMs stepping up in this respect? “Big time. When you look at Rolls-Royce, and when you talk to GE, when it comes to the engine you will sec that they arc investing a lot. If you see their research and development budget, I think that tells you where the money is going.” One year into the job, Al-Omar takes pleasure in the carrier being crowned the world’s most improved airline of 2021. II rose from 51st position to 26th in the Skytrax ranking of global airlines.

But how does he compare aviation to the other industries in which he has worked?

One of the most regulated industries

“I think it’s very interesting and is one of the most regulated industries. It is still behind when I compare it, for example, to the information and communications technology (JCT) industry, when it comes to digitisation, artificial intelligence (Al), and big data,” said Al-Omar.

“I think there is big room for improvement for the aviation industry. Going forward, I think you will see a lot of investment in that to be more efficient and smarter in our operation. We will move from preventive to predictive maintenance operations.

“In a year’s time. we will talk a lot about what Saudi Airlines has done on the big data concept and initiatives for digitising our operation and customer experience. That is one of our main areas of focus,” he concluded.