As the Official Airline Partner of the ABB FIA Formula E World Championship, all SAUDIA Flights from the Kingdom to London over the 2022 Sabic London E-Prix race weekend had 100% of their unavoidable emissions related to fuel use offset via Gold Standard credits

London, UNITED KINGDOM – SAUDIA, the national flag carrier of the Kingdom of Saudi Arabia and Official Airline Partner of the ABB FIA Formula E World Championship, operated a full weekend schedule of flights which had 100% of unavoidable scope 1 carbon emissions offset in support of the 2022 Sabic London E-Prix, which took place around London’s Royal Docks and ExCeL exhibition centre, July 30-31.

As part of the airline’s sustainability initiatives and in support of its partnership with the Formula E all-electric racing series, SAUDIA operated a full weekend schedule of flights which had 100% of unavoidable scope 1 carbon emissions offset from Riyadh and Jeddah to London Heathrow.

SAUDIA offset the unavoidable scope 1 carbon emissions for the flights, including radiative forcing impacts by a factor of 1.9.

SAUDIA chose to work with New Zealand based enviro-tech company CarbonClick, who have also facilitated the airline’s world’s longest net-positive flight as part of the SkyTeam Sustainable Flight Challenge.

The contribution by SAUDIA to this project will contribute to supplying clean energy to the grid and providing sustainable electricity to regional communities. The wind power project also delivers economic and social benefits to these communities through job creation and improving public health. 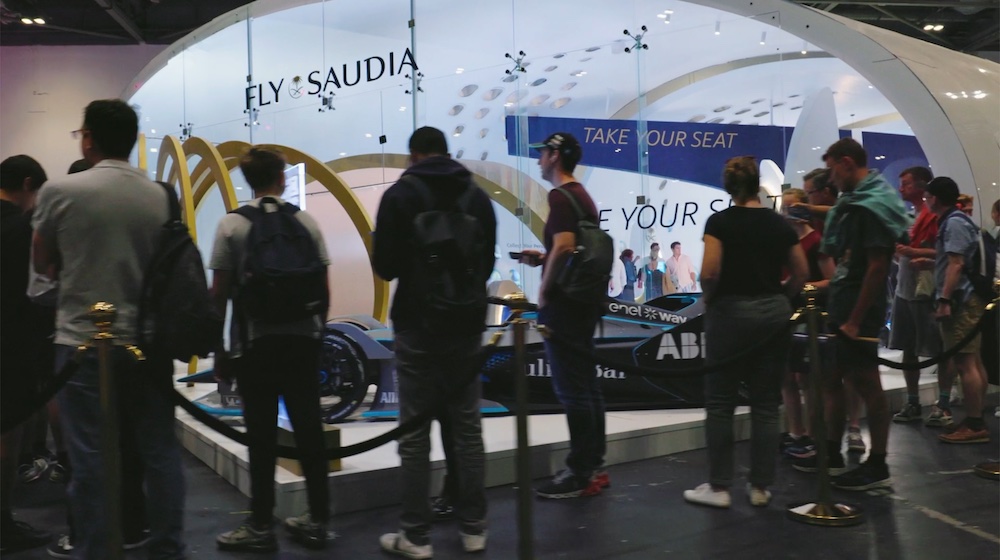 News of the sustainability initiative in support of the Formula E race weekend was shared onboard with all guests during the flights.

The airline flies daily non-stop between both Riyadh and Jeddah to London Heathrow, operated with a widebody Boeing 777-300 in a tri-class configuration of First, Business and Guest (Economy) Class.

SAUDIA is an operator of one of the youngest fleets in the skies, with an average aircraft age of 6 years or less, flying to more than 100 destinations across four continents.

All guests travelling on SAUDIA have access to the latest inflight entertainment system called ‘Beyond’ which features more than 5,000 hours of HD content including the largest Islamic content in the skies; latest Hollywood films, TV series, e-books, weather reports, shopping, Wi-Fi connectivity and more.

The airline is the Official Airline Partner of the world’s first all-electric motorsport series, the ABB FIA Formula E World Championship, which is currently in its eighth season.

SAUDIA is a member of the international Air Transport Association (IATA), the Arab Air Carriers Organization (AACO) as well as a member airline in the SkyTeam alliance since 2012. Saudi Arabia’s national flag carrier was named the Middle East’s Fastest Growing Airline Brand in 2022 by Brand Finance and the World’s Most Improved Airline in 2021 by SkyTrax. SAUDIA also received the prestigious accolade in 2017.

The carrier is ranked as a Global Five-Star Major Airline by the Airline Passenger Experience Association (APEX) and has been awarded the Diamond status by APEX Health and Safety powered by SimpliFlying, in recognition of the airline’s extensive safety measures in response to the pandemic.

CarbonClick is the global leader in high-trust climate action. Since 2019, they have empowered airlines and other aviation companies with simple, transparent, and effective carbon offsetting solutions. In February 2022, CarbonClick became a B Corp Certified company for its commitment to meeting and maintaining the highest standard of social and environmental impact.