As part of the agreement, GE Aviation provided flyadeal an end-to-end engine management solution, combining engine overhaul services along with logistics for engine removals, changes and leases. Previously, the cost and logistics of engine removal, delivery and collection was the responsibility of the airline or lessor customer. The company’s turnkey approach means these logistics will be handled by GE and its suppliers.

“We are delighted to be working with GE Aviation in developing its first integrated turn-key engine services program which addresses the complete A to Z needs of flyadeal under a single vendor agreement between GE and flyadeal. It’s a testament to how a true low fare operator like flyadeal is driving innovation and change by working closely with key partners willing to adapt to the specific operational needs of flyadeal,” said Mike Hewitt, chief operating officer of flyadeal.

GE Aviation is providing flyadeal integrated overhaul and engine change services through Caerdav, an independent aviation Maintenance, Repair and Overhaul (MRO) provider that is a GE vendor in this agreement. 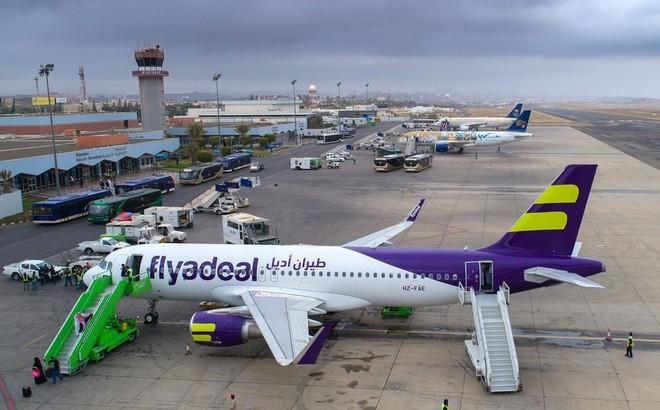 “This idea represents a new way of doing business for GE, and we are proud to be one of their trusted MRO suppliers. Through working closely with Caerdav, GE will be able to offer their customers a more streamlined, efficient and cost-effective way of managing their engine requirements,” said Joachim Jones, group CEO for Caerdav.

The TrueChoice suite of engine maintenance offerings incorporates an array of GE capabilities and customization across an engine’s lifecycle. Each TrueChoice offering is underpinned by GE Aviation Fleet Support’s 24/7 Remote Monitoring and Diagnostics to help reduce maintenance burden and service disruptions for customers.

™TrueChoice is a trademark of GE.

*CFM56 engines are a product of CFM International, a 50-50 joint company between GE and Safran Aircraft Engines.

flyadeal is an Everyday Low Fares Airline that has been created to meet the growing demand for affordable air travel in Saudi Arabia and the Middle East. It is owned by the Saudi Arabian Airlines Corporation and was formed as part of Saudia Group’s SV2020 Transformation Strategy. The carrier launched operations on 23 September 2017.

The launch of flyadeal as the Kingdom’s newest airline aims to serve both domestic and international destinations for leisure and business customers, Hajj and Umrah pilgrims, as well as the rising number of tourists to Saudi Arabia.

flyadeal currently operates a fleet of 15 A320 CEO and NEO aircraft serving 18 domestic routes and two international routes between Riyadh and Dubai and between Riyadh and Kuwait. The airline has concluded an order with Airbus for 50 A320neo aircraft and is expected to operate 50 aircraft by 2025.

GE Aviation, an operating unit of GE (NYSE: GE), is a world-leading provider of jet engines, components and systems for commercial and military aircraft. GE Aviation has a global service network to support these offerings. For more information, visit us at www.GEAviation.com. Follow GE Aviation on Twitter, YouTube, LinkedIn and Instagram.

Caerdav is a fully-approved and certified MRO and pilot training company based at the St Athan – Cardiff Airport Aerospace Enterprise Zone in South Wales, United Kingdom.

Operating from a former RAF maintenance base equipped with 6,000ft ILS runway and parking for up to 20 narrow-bodied airliners, Caerdav specialises in MRO work for Airbus 320s and Boeing 737s, and provides complete training for airline pilots and cabin crew.